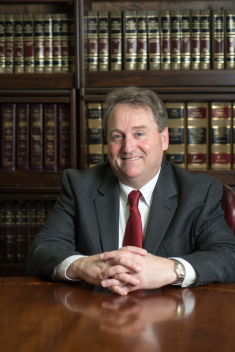 Chuck has been practicing law in the Washington, DC Metropolitan area since 1985. He joined McChesney & Dale, P.C. in 1989. He concentrates in employee benefits litigation, estate planning, estate and trust administration and the review and preparation of Qualified Domestic Relations Orders. He also is engaged in general litigation matters including contracts, estate and employment-related cases. At times, he assists in the firm’s practice as General Counsel for various Taft Hartley Pension, Health and Welfare and Apprentice Trust Funds. He has represented numerous clients presenting administrative appeals of long-term disability claims and filing civil actions in the local United States District Courts involving these claims. He also assists persons who have pension issues and prepares Qualified Domestic Relations Orders to protect clients’ interest in their pensions. He has represented clients before the Circuit Courts in Montgomery, Prince George’s, Howard, Baltimore City, Baltimore County and Anne Arundel County. He has handled appeals before the United States Court of Appeals for the District of Columbia, the Fourth Circuit Court of Appeals, the District of Columbia Court of Appeals and the Maryland Court of Special Appeals. He also regularly represents clients before the various Registers of Wills in Maryland and the District of Columbia. He is frequently called upon to act as a trustee or as counsel for an estate representing the personal representative or beneficiaries of an estate.

Chuck and his wife Nikki have two children. He is an avid baseball fan and tries to attend as many games as possible throughout the season. Although a lifelong Yankee fan, he roots for both for the Nationals and that other team in Baltimore. In fact, Camden Yards is his favorite stadium. He along with family and friends try to attend games at stadiums throughout the country and it is his goal to attend games at each major league stadium. At this point in time, only Middle America awaits him. He has also recently re-discovered his love of hockey and has become an avid Capitals fan despite his lifelong worship of Bobby Orr.