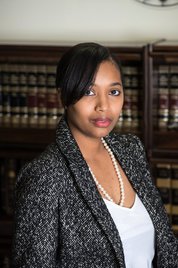 Johanna Montero, originally from the Dominican Republic, grew up in the Bronx, New York. At the age of sixteen, she received a full-tuition leadership scholarship to Dickinson College in central Pennsylvania.  After graduating from College, she remained in Pennsylvania to pursue a career in law from The Pennsylvania State University School of Law.  While at the Penn State School of Law, she was a lead oralist and writer of the Vis International Moot Court Team and was involved in the Penn State Immigrants’ Rights Clinic.

In 2010, she was admitted to the Pennsylvania Bar. Following law school, she obtained an LL.M. in Employment and Labor Law with a sub-specialty in Administrative Law from American University, Washington College of Law. She has recently been admitted to the D.C. Bar. Outside of work, she enjoys spending time with family, attending church events, and going on long runs.